Nano Apartments Could Be The Future of College Dorms

In order to solve a student housing crisis, the University of British Columbia (UBC) located in Vancouver, Canada is planning on 140 square foot that will house micro apartments to resolve the imminent problem.

According to the Province, the college currently boasts an enormous student waiting list that tops 6,000 for on campus accommodation. There are scores of students desperately trying to find affordable accommodation in Vancouver which is now considered the most expensive city in all of North America.

The University of British Columbia is planning to overcome the accommodation with the introduction of “Nano suites” which will have a bed, bathroom, kitchen and desk and command a rent ranging from $675 – $695 per month, these tiny apartments will be the cheapest student on campus accommodation. 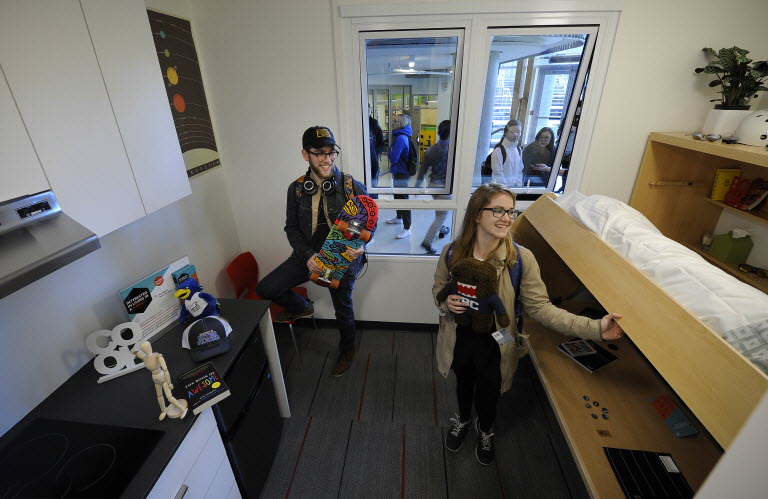 Andrew Parr, the managing director of student housing and hospitality told CBC News when interviewed that one of the biggest challenges for students at UBC is finding affordable housing options. For this pilot project the college is creating 70 of the Nano suites and they will eventually be part of the $70 million housing complex that will be able to offer 650 students residency and the project has an expected completion date of 2019.

The university built a Nano suite I their student lounge area and the response has been incredibly positive. The compact apartment covers 140 square feet, but thanks to the ingenious design the apartment offers the student everything they really need from a miniature kitchen complete with a cupboard, sink, hob, drawers and a fridge plus a storage area which is ideal for a chair. There is a study area with good sized desk that folds down to reveal the bed. Finally, there is a good sized bathroom area complete with full sized shower unit. There will also be slightly larger apartments that will have bigger beds.

These Nano suites are an excellent idea and so compact that there is no element of wasted space, however a concern may be storage, particularly if the student has a considerable amount of luggage, but they will certainly fill an immediate need and provide an affordable answer for students.

Living in a Nano suite might not be the right choice for everyone, but will suit the large majority. After all students are used to having to cram themselves into really small spaces and having to share a kitchen and bathroom too, but the launch of the Nano suite can make the shared facilities a thing of the past.

When the prototype Nano suite was unveiled for the first time the reactions were mixed, whilst many felt that the mini apartments were cool, one student commented that as a really messy person they thought this type of accommodation for them was a recipe for disaster! The main disadvantages that were voiced were having to pull the bed up or down to work or sleep, also not being able to leave work unfinished open for continuation. Storage was the other real issue identified, particularly with the international students commenting on the lack of space where they would be able to store their suitcases.

On a positive note it was pointed out that a traditional dorm is possibly even smaller and the Nano suite are offering independent living with the student having their own personal space. The mini apartments have been summarized as 140 square feet of independent living.

Paige Naughton and Emily Peel are studying social work and although they were impressed by the design of the suites they did raise concerns about the effect these small spaces could have on students. Their main concern was the mental health implications and isolation that students could feel. Both Naughton and Peel were of the persuasion that students would be better off living in a shared house off of campus and making the commute. However, this is only their opinion.

The Nano suites are not cheap and the cost to build them is in the region of approximately $300 per sq. ft. This is the cost for per square foot for the entire 650 bed complex that will be sited above the bus terminal. The building will rise in tiers which constitute up to 12 tiers and there will also be a number of larger bachelor suites as well as two and four bedroom suites, however, I am guessing there may already be a waiting list for these even though they have not even been constructed as yet.

Nano Apartments Could Be The Future of College Dorms