A USA With Bernie Sanders in Charge

During US election time, it’s quite common to imagine what life would be like with a certain presidential candidate in charge. Unfortunately, most people are picturing what the scarily bleak existence would be, if Trump would get in charge. Which means he’s dominating the headlines. However, what if the underdog managed to win over the hearts of America? Imagine what a USA with Bernie Sanders in charge would look like… We’ve pictured the good, the bad and the ugly, so you don’t have to. 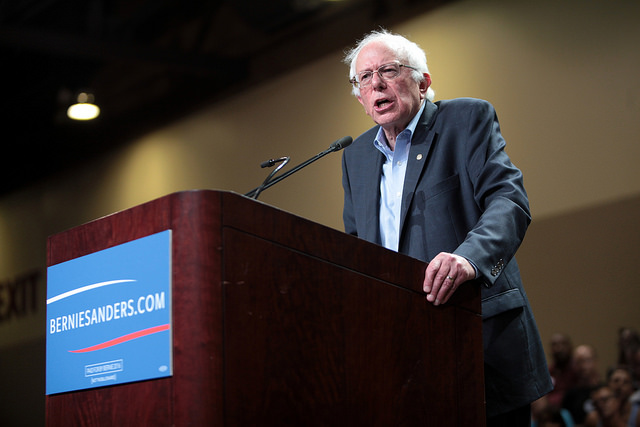 Before we go into his policies, it makes sense to learn a little bit more about Bernie Sanders himself first. Born and raised in Brooklyn, New York, Sander’s father was a Polish immigrant who moved to the US in 1921. Much of his family remained in Poland and ended up being persecuted for being Jewish; meaning many of them died in the holocaust. Bernie first attended Brooklyn College before moving to the University of Chicago in order to study political science, and this is where he first cut his teeth in the world of activism. Over the 1960s and 70s, a young Bernie Sanders was seen at various civil rights protests, peace rallies, and was even present at the famous Martin Luther King Jr speech in 1963. His political career began in the early 1970s, when he joined the Liberal Union Party, before becoming Mayor of Burlington in 1980. He is now the longest serving independent in US congress history, before finally becoming a member of the democratic party in 2015.

Free Education for All

One of the key policies that Bernie Sanders has been keen to push forward is the premise of free education for all. This has raised some eyebrows from experts across the globe, but has capitalized on the discontent of millennials around the US. Bernie Sanders is pushing for one of the best-educated workforces on the planet, and believes that scrapping tuition fees can help pave the way for America. He wants all public colleges and universities to be completely free, while also stopping the government from making money on student loans. While this may seem like a dream for those planning to go to university in the next few years, it could have quite a huge impact on America’s economy as a whole. Bernie hasn’t really given much input as to where the extra funds would come from, leaving many worrying taxes would be raised to cover the costs.

It’s one of the topics scoffed at most by right-wing outlets, such as Fox News, but Bernie Sanders hasn’t let that deter him. As the son of an immigrant himself – and also calling the USA a nation of immigrants – this is one of the key points Bernie has been trying to push through. A fair and humane immigration policy seems like a far cry from Donald Trump’s ‘close the borders’ and ‘build a wall’ mindset. This has caused a pretty serious division between the Republican candidates and the Democrats. Should immigration by more humane? Of course. It just depends whether you think the country and economy can withstand it.

There is something that has stood out in the speeches of Bernie Sanders, and something which has won over the hearts of millions. This candidate truly believes in social justice and equality. The fact he has been protesting for these things for decades, only goes to further increase his backing. Equal rights for women, equal rights for ethnic minorities, equal rights for the LGBT community, equal pay…. These are all things that Sanders has been pushing during his speeches over the last few months. Could America be a more equal and progressive country with Bernie Sanders in charge or would this further alienate those with more regressive views?

Many people say that Bernie Sanders is already out of the Democratic race, with Hillary Clinton charging ahead. However, the battle is never truly over. Even if Clinton won the primaries, it’s like Sanders would still play an important part in the future of America. And with policies such as equality and the humane treatment of immigrants, that can be a bad thing – right?

A USA With Bernie Sanders in Charge