Want to Get Your Pizza Delivered by Drone? You Can in New Zealand

Okay, so you probably clicked this title thinking it was hyperbole designed to draw you in, right? Wrong! In fact, you actually can now get your pizza delivered via drone in New Zealand. Not only is this quite possibly the single coolest thing we’ve ever heard of, but it’s also a huge step forward for science and technology. 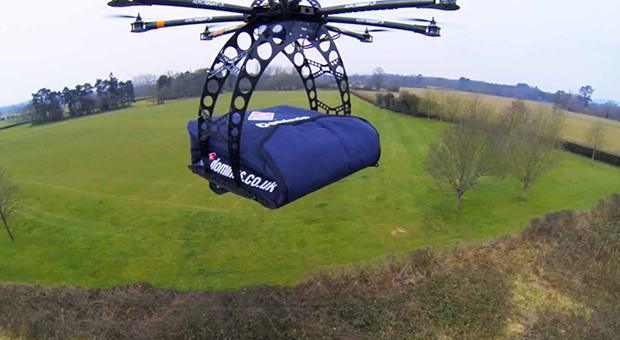 You may have seen or read in the news recently that pizza giant Domino’s made the first ever pizza delivery using a drone. The unmanned drone whisked slices of hot dough and melted cheese to an address in Whangaparaoa, a peninsula just north of Auckland.

Think about how this changes the scope of pizza delivery. Forever! Can you imagine placing an order for your meat feast and having it flown straight to you and winching down your takeaway meal?! Many of us pizza lovers out there have probably dreamed of this moment for quite some time. And now we could be edging ever closer to seeing that as a reality.

You can see videos of this remarkable feat online, and the footage is pretty rad! This Domino’s delivered stunt comes a mere three months after they started testing drone delivery. This seems to indicate that it has been a popular and successful method, and the company can’t wait to try it out. Indeed, discussions are already underway to trial the idea in places around Europe, and then later the UK.

It would be remiss not to consider the pros and cons of this drone delivery service from a customer’s perspective, as well as Domino’s.

There are plenty of positives to using the drone approach to deliver pizza. Other than the fact that it is unassailably cool, these are some of the principal benefits.

Well, for a start it will surely make the delivery process much faster and more efficient.

This is obviously an environmentally friendly move as well.

Drones can access remote areas that may be difficult for drivers or riders to get to.

The human error element of delivery will be reduced.

But, as with anything involving technology, there are also some negatives as well. And, to remain objective, we need to look at the drawbacks as well.

A drone can’t make decisions outside of its programming. It is incapable of using initiative and making spur of the moment decisions.

If drones become widely used, it could put people out of a job.

The interaction element goes out of the window.

Malfunctions could be a problem, as well as vandalism and cost.
Now we’ve looked at the pros and cons can we get back to marveling at the awesomeness?! This changes everything when it comes to pizza delivery. We don’t know about you, but we certainly hope there comes a day when we can collect our pizza from a flying drone! And we’re not alone because Domino’s carried out a poll where 7 in 10 customers stated a drone as their preference!

This marks the first time a pizza company has collaborated with a drone company, in this case, Flirtey. The news follows 7-Eleven’s exploits last month when they trialed a commercial delivery via drone.

Is this another example of us disappearing further down the rabbit hole of technology? And, if so, is that necessarily a bad thing? Well, it’s subjective, but it does show that drones can be multi-functional.

After writing this article (and watching the footage), it got us thinking about what else drones might be used for. Drones have already become a bigger part of society than we might have realized. For instance, they are already used to film live events, survey dangerous areas and helping law enforcement! But they also look like they could become the new delivery drivers, and not just in the world of takeaway pizza.

Earlier this year in the UK, online giants Amazon talked about trialing delivery drones for customers. The government approved plans to allow the aircraft to deliver goods.

If you’ve seen those Amazon adverts with Jeremy Clarkson, you will already have some idea of what we are talking about. It seems like there will be a lot of different designs of drones to carry different goods. Customers will need landing pads in their gardens, and it might be limited to people in houses rather than apartments. But this is still a pretty amazing development.

Think about how amazing this will be from a customer perspective. You won’t have to wait around at home for hours to have your package delivered. There will be no problems with delivery drivers throwing packages over the garden gate and ruining them.

Don’t get too excited, though; this is something that won’t be happening anytime soon. Amazon has already pledged they will not launch the service until they can prove that it’s safe. And regulations surrounding drones are going to have to change as well. But this could be something that will slowly be integrated over the next five or ten years.

In the not too distant future, we may well reach a stage where drones will be responsible for delivering anything we order online. It shows how far technology has developed in the past 10 years. We are currently in the trial stages for something that seemed only an impossible dream just a decade ago.

Want to Get Your Pizza Delivered by Drone? You Can in New Zealand